Currently, We’re going through a 99 day Facebook hiatus. We read the 99 Days of Freedom website, and we were so inspired that we wanted to go back to life without Facebook for a while.

We’ve been off Facebook for more than 20 days now. Things are going great, and we don’t even miss being on Facebook. We’ve have had more time to devote to our other social network pages, and Twitter is one of those social networks.

Twitter is the 7th most popular website in the world according to Alexa, so its worth us paying attention to.

You’re allowed to customize your Twitter profile by adding your own profile and header image, specifying a theme color, and adding a link to your website. For more information, you can see Twitter’s documentation here.

Take a look at Mr. Technique’s Twitter profile below. 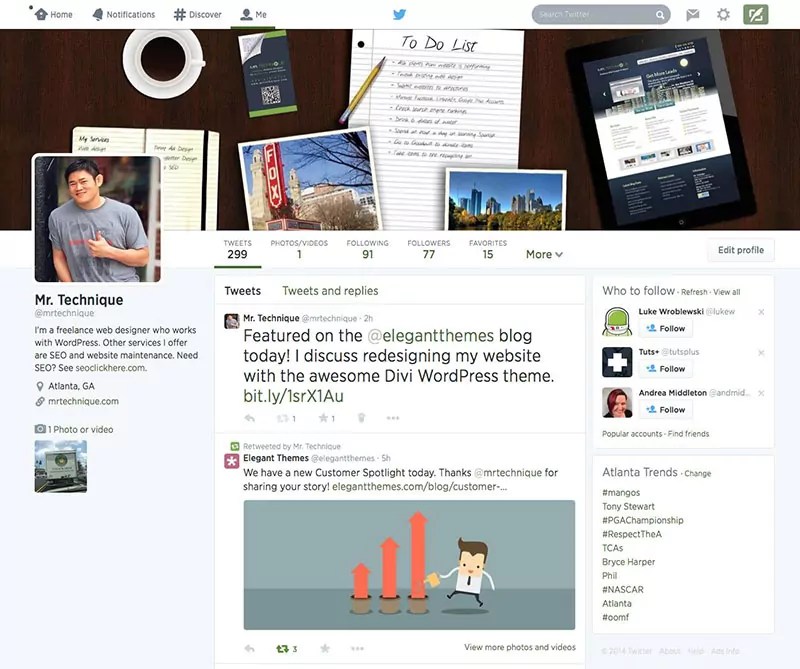 Using Twitter is pretty simple. You’re only allowed up to 140 characters in each of your posts, so you can’t ramble on and on about a subject. You can use a hashtag (#) in your message to participate in a topic of discussion. You can type in a hashtag subject in the search box to see how popular the topic is. In the screenshot below, you’ll see that #webdesign is a pretty talked about subject. 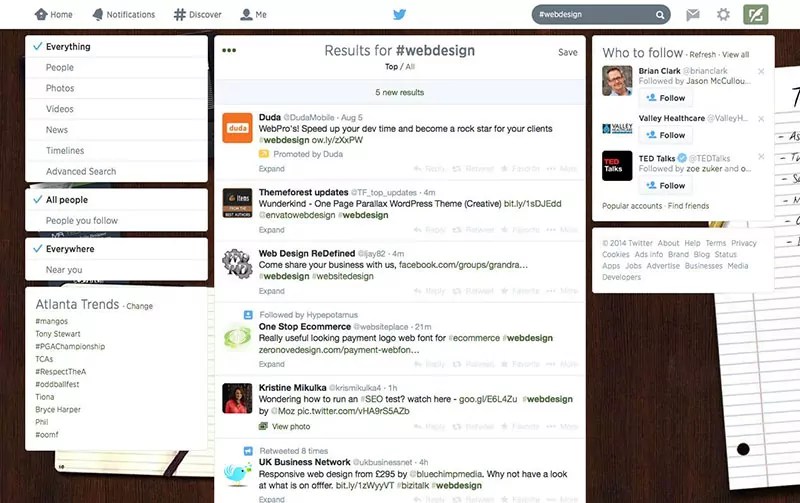 If you’re going to add a link to a website, it’s recommended that you use a URL shortener like Bit.ly. You want to use most of those 140 characters for your teaser text and hashtags like in one of my past tweets below:

My latest blog post on how to get more leads with your copy. #copywriting #webdesign #onlinemarketing #seo http://t.co/6aIXzKimeN

Twitter’s been great for communicating with our vendors who are larger than we are. Many companies respond quicker on Twitter than they do on email. We’ve communicated with some of our vendors through Twitter like Toggl and ElegantThemes.

We actually had the pleasure of meeting Annika Helandi, one of Toggl’s main team members, at a local Starbucks. Annika traveled all the way from from Northern Europe to meet with us (and other Toggl customers) one-on-one. She asked us for feedback on their online time tracking software, and then gave us a free t-shirt.

ElegantThemes just featured us on their blog and posted the news on Twitter.

We have a new Customer Spotlight today. Thanks @mrtechnique for sharing your story! http://t.co/k1XErZkfMU pic.twitter.com/YMj05JPPBf

We can’t talk about building followers yet because we don’t have that many followers……yet.